Dear Mississippi, What’s In a Flag? 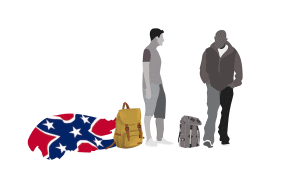 Dear Mississippi, What’s In A Flag?

“I see you’re from Vicksburg. So, tell me, what is it like to grow up in a place that’s basically a shrine to the white man?”

I was asked this question while in college at the University of Southern Mississippi during an interview for a campus leadership group. Interestingly enough, while the reputation is warranted, I hadn’t really thought of it that way. There are Confederate monuments, Civil War-based reenactments, and the belief by many that the South (or the Confederacy, in particular) shall rise again. However, my answer at the time was based on the fact that I, a young black man, had been largely unexposed to firsthand encounters with most of these things although I knew they existed.

However, when the Mississippi State Legislature voted to change its state flag this summer – specifically to remove the Confederate emblem it has prominently featured since 1894 – in favor of a design overhaul yet to be finalized, a question came to mind. What’s in a flag?

Sure, this symbolic change comes along as one of the latest actions taken to remove Confederate monuments and symbols – a movement taking place in various parts of the country (especially the south) over the last several years which has been bolstered by ongoing nationwide protests in response to the deaths of George Floyd, Breonna Taylor, and many others. I applaud that. I also find it necessary to point out that a symbol is not the concept it represents.

The Confederate Flag is a symbol of identification, sympathy, and pride felt for the Confederacy – a group of Southern states which attempted to secede from the United States of America. Many people attempt to justify, obscure, or explain away why the Confederacy seceded – citing issues such as states’ rights, the fact that the North was becoming more industrialized as the South was remaining agricultural and the difficulty reconciling both interests in federal policy, and various others. Make no mistake: the Confederacy was primarily motivated by the desire to maintain the institution of slavery in order to support the life and economy the South had come to know and thrive on. Thus, it is seen and wielded (everywhere except on the record) as a symbol of white supremacy.

Once when I was in junior high school, I noticed a white student jovially kicking a pile of backpacks while a group of us waited for our parents to drive us home from school. When he kicked my backpack, I knew he had no idea it was mine and didn’t take it personally, I just calmly asked him not to kick my things. He pulled a Confederate flag out of his pocket and showed it to me as if it were a gun – to which my response was anything but calm. I tell that story because even as young teenagers, we both knew exactly what that flag meant. However, it is one thing to remove or replace a symbol, and another thing entirely to change the underlying sentiment which gives rise to that symbol.

Mississippi’s large, looming race issues do not begin or end with the state flag – not when there are still hostile beliefs toward black people held by many of its most powerful and influential figures. Those beliefs, because of some of the people holding them, become the policies and practices which shape institutions; and of course, the same is true throughout the nation. In Mississippi, however, consider the fact that for decades (and even in 2020, weeks into the global pandemic) the governor, regardless of party affiliation, has designated the month of April to be Confederate Heritage Month – a month dedicated to an ethos that would have continued the brutality, subjugation, and exploitation of black people long considered inferior and unfit to have a true place in society as respected equals. Consider also that Mississippi is one of two states (the other being Alabama) which recognize Dr. Martin Luther King Jr.’s birthday as Martin Luther King Jr./Robert E. Lee Day – because even the most prominent Black civil rights figure must not be honored singularly for a true, shining legacy. More substantively, what about the Blackhawk Rally, routinely attended by Mississippi governors regardless of party affiliation, which is a fundraiser to support all white private schools known as ‘segregation academies’?

These tributes to bigotry, which are also symbols but betray deeper sentiments about white supremacy, the appropriate ‘place’ of people of color, and are often used to intimidate us, are not erased by changing a flag. We must begin the work of rooting out the racism which has been such a mainstay of Mississippi culture – beginning with the acknowledgment that support for the Confederacy was support for slavery. From there, we must acknowledge that the flag actually undermines our state’s identity.

Mississippi is known as the Hospitality State. As a native who only moved away after graduating college, I have experienced that hospitality on countless occasions from friends, mentors, neighbors, and random strangers, many of whom happened to be white. However, state policies and voting trends are far from hospitable to black residents – even though nearly 40% of the state’s population is Black. So, who are we? I’ve heard many people I respect say that Mississippi has come a long way – the problem is that we’re more invested in making the statement than taking the trip. Ask your black residents how far Mississippi has come, and how they feel about race equity. They are the ones who disproportionately bear the brunt and burden of an unfortunate history.

One last story. When I was in college, there was a relatively young new faculty member I worked with on a few projects. I remember him saying to me “You’re from Vicksburg?! You must hate being from a city known for being completely sacked in the Civil War.” My response – “Ummm… Some of us are happy the war turned out that way.” Those of us who are would be even happier – because we know our state would be better and more equitable – if the policies, practices, and institutions within our state reflected the fact that the Civil War ended long ago, and that the racial hostility which still rears its head here doesn’t deserve political support or monuments. It requires reconciliation and relegation to history – neither to be celebrated nor repeated.

Raising up ALL voices – We must flatten the curve behind the wall, too!

Raising up ALL voices – We must flatten the curve behind the wall, too!

Let’s Stop Potential and Unintended Death Sentences As the Coronavirus or COVID-19...