Hunter-Judges: Refining their Craft for Over 400 Years 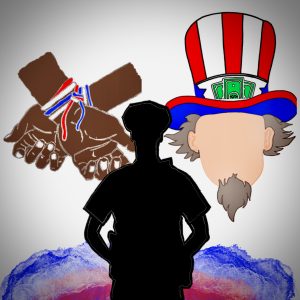 Hunter-Judges: Refining their Craft for Over 400 Years

As I have been observing my sons growing up and enjoying viewing certain cartoons, I quickly noticed how early the idea of the good guy-bad guy gets introduced into their theoretical framework.  Usually little ones want to be a hero and pick being a good guy.  Someone usually gets stuck playing the bad guy and gets chased around the house, but thankfully it is all make believe – or is it? I push my sons critical thinking skills to question the images and ideas they encounter while reading or watching television or the internet.  However, in reality while my sons are playing in the living room as “good guys”, when they are older, will some people consider my sons’ bad guys by default?

Each one of us may have a different response to the question, based on diverse variables, but at the end of the day we live in a race based country that thrives on the process of “Othering”.  Just as kids have ingested the cartoon programming of good and bad, we grow up ingesting ideologies that develop distinct frameworks that allows us to function in our environment. Rarely does one question or investigate these ideas until well into adulthood. For the most part, these ideas fall by the wayside and the utility of their importance subsides without affecting others as we transition into adulthood and develop newer frameworks.  However, there exist theoretical frameworks such as white supremacy, based on fallacious grounds, that pervade practically every major institution in this country.

As of this moment though, I want to examine a facet of “our” society in which the aforementioned perspective is subtly integrated into the “others’” psyche and has wielded a horrific and often, deadly type of power over the “other” that we have been eye witnessing too often these days as a result of social media.  I am referring to the imposed institution of law enforcement we have come to call the police.  The police have their origins steeped in drunkards in the form of volunteer night watchmen and slave catchers in the South dating back to the 1600’s.  By the 1880’s all major cities across this nation had municipal forces of some form or fashion in place.  A description of the Southern states style of American policing, known as the “Slave Patrol” is eerily reminiscent of how modern police function today.  The slave patrol had three primary functions: 1) hunt down, apprehend and return “runaway” slaves to their so called owner, 2) to establish a form of organized terror to deter revolts or uprisings of any kind, and 3) to maintain a form of discipline for slave-workers who were subject to summary justice, outside of the law if anyone broke any of the rules of the plantation they found themselves on.[1]

This brings us to the function of policing today in comparison to the slave patrol.  Are communities with diverse ethnicities hunted down today? If so, how?  Former officer Christopher LaForce said, “I got tired of hunting Black and Hispanic people because of arrest quotas,” in his affidavit, explaining his decision to retire in 2015.[2]  Officers were caught in a debate of overpolicing and the criminalization of poverty via pressure coming down on officers to enforce low level violations against what they refer to as Black and Hispanic people, while discouraging the same enforcement to White and Asian folks.  Across the nation officers patrol specific neighborhoods to see who they can catch.  This is what modern day slave catching looks like today, because if you don’t pay your tickets, where do you go?  Of course, the modern day plantation known as the county jail.

A deeper terror begins to really unfold when we look at how some of these petty stops for low level offenses have turned deadly.  These reoccurring scenarios we have been witnessing of police officers becoming judges and meting out death sentences in the streets, usurping the very law they are supposed to be upholding.  It seems we get an idea of why the institution of policing at its core believe in the use of deadly force for illogical reasons on folks with darker skin, its mother is slavery and its father is capitalism.  As a result of the spirit of humanity fighting back in the form of civil unrest and protests, in order for police to keep a countenance of legitimacy, they have had to change their techniques of oppression just a tad to keep cynicism at bay and the scent of wickedness tamed to keep their departments funded.  Armed with qualified immunity as a wild card to combat the voice of the voiceless, they murder on our streets for all to bear witness.[3]  When looking at a white woman, selling cigarettes, or failing to use your turn signal are the reasons you can face death on the streets or in the plantation we know nothing has changed from the inception of the institution of policing.  Policing in some communities is not a vision of safety but rather a symbol of death and punishment and a system communities have sadly come to depend on as a default resource.  Its time for a new way of dealing with matters and policing people is not the modality.

I do not want to leave my thoughts without mentioning a resource for folks to dive deeper into this conversation about police presence in their respective communities on their own.  An investigation of other modalities is worth understanding for the purposes of pondering and putting forward an alternative to replace the current structure we have, to truly make our communities a safe and sacred space where life and love thrive.

With Love and Strength,

[1] The History of Policing in the United States, Part 1,  Dr. Gary Potter: https://plsonline.eku.edu/insidelook/history-policing-united-states-part-1

Yes America! This is the Policing you Built. Now What?

Dear Mississippi, What's In a Flag?

Dear Mississippi, What’s In A Flag? “I see you’re from Vicksburg. So,...